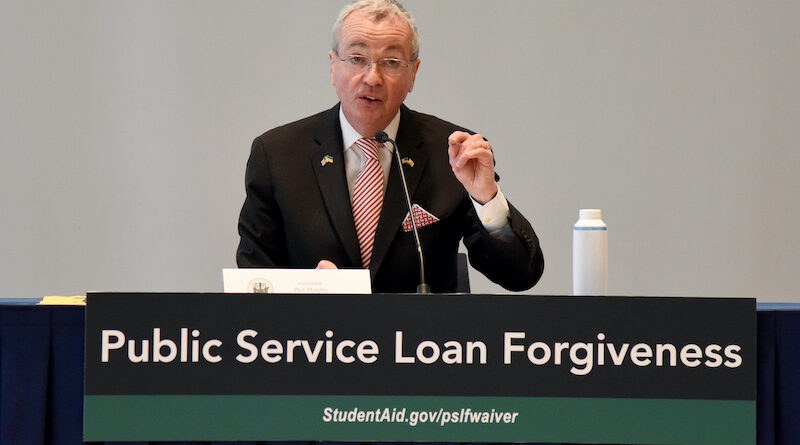 Gov. Phil Murphy on May 23 led a roundtable discussion about the Public Service Loan Forgiveness (PSLF) program, describing it as “a gem, but in many cases, a hidden gem.”

The PSLF program, Murphy explained, “allows people working throughout the public or nonprofit sectors to have that service credited against their outstanding federal student loans. This is open for any New Jerseyan working in federal, state, county or local government; for those working in our public schools and colleges and universities; as nurses, first responders, National Guard members and other military; and staff members of nonprofit organizations.”

Murphy added, “A one-time waiver will allow anyone who worked full-time at a job eligible for loan forgiveness going back to October of 2007 … even if they were previously told that they were ineligible. And if you had a combined 10 years of public service employment, you could qualify to have your federal student loan debt canceled and your payments credited back to you.”

Applications for the one-time federal waiver must be submitted by Oct. 31, 2022; for more information, click here.

Joining Murphy for the PSLF roundtable, held at The College of New Jersey, were U.S. Under Secretary of Education James Kvaal and Federal Student Aid Chief Operating Officer Richard Cordray.

“We can’t overlook the large numbers of people out there who have loans that they’re really struggling to repay, and in some cases are left even worse off than if they hadn’t gone to college at all,” Kvaal said. “So we need to be very, very serious in thinking about how we’re going to address the challenges to debt.”

“I’m glad that AFT is in the house today because it rings in my ears what Randi Weingarten says about this program,” Cordray said. “She says it very simply: ‘Ten years means 10 years, and if you put in 10 years of public service, you should get full relief on your loans.’ ”