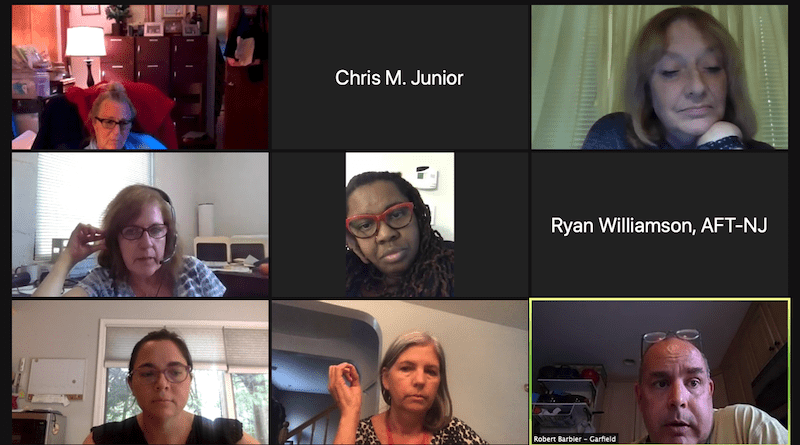 AFTNJ President Donna M. Chiera hosted a virtual roundtable Sept. 28 with prekindergarten-12 leaders for them to share their school-reopening experiences to date.

Robin Pinckney-St. John, an AFTNJ PreK-12 vice president, talked about how open enrollment in the Newark school district contributes to the challenges in monitoring COVID-19 contact tracing, with students who are in the same family attending multiple schools.

“When you have open enrollment,” she explained, “you’ve got kids who, OK, maybe this school shut down, but who knows [if] the other kid’s school isn’t shut down? But the kid is in quarantine: What if they do have COVID? Now they might be bringing it to that other building.”

Rob Barbier, AFTNJ’s PreK-12 executive vice president, said some students in Garfield are not coming to class due to anxiety, and while accommodations are being worked out for them, “at the end of the day, there is no online learning [like we had last year].”

He described the students’ transition from fully remote learning to being back in school buildings as “slow,” adding, “You have to constantly be talking to them about putting their phones down. When they were online learning, they could hide that.” Barbier also expressed concern about the lack of social interaction among students: “The classrooms are really quiet. You don’t see that casual interaction, and it’s kind of sad because that’s part of school. There’s the academic side, and there’s the social side.”

As for the positive, the Garfield school district has made use of its outdoor space for learning “as much as we can,” weather permitting, Barbier said — and that’s something Perth Amboy Federation President Pat Paradiso wished her district would have done.

When North Bergen Federation of Teachers President Carol Toomey asked whether her colleagues were dealing with staffing problems, all of the participants either answered yes or gave an affirmative nod.

“We have bus driver shortages; we have special-ed teacher shortages,” Pinckney-St. John said.

“We have so many administrators, I don’t know why they can’t pitch in and cover classes,” Paradiso said.

🎃 Get FREE engaging #PreK12 #Halloween spooky content which won't have any of your students screaming, "Boo!"😱. Your students will learn with smelly bats, monster microbiology, Halloween poems & more!

“I thanked @POTUS for not only bringing educators to the table but for listening to and respecting their opinions. He responded with a chuckle and said if he didn’t, the @WhiteHouse would be very lonely without his wife.” — AFTNJ Prez @DchieraM More here:
http://aftnj.org/topics/news/k-12/2021/chiera-joins-biden-in-north-plainfield-as-he-promotes-build-back-better-agenda/

Rutgers (New Brunswick and Newark), Montclair State and Rowan made the list.
https://www.nj.com/education/2021/10/7-nj-universities-are-among-the-best-in-the-world-us-news-global-ranking-says.html

Today (Oct. 26) is the deadline to apply via mail for a vote-by-mail ballot. More info here:
https://nj.gov/state/elections/vote-by-mail.shtml

Looking for ways to mark #DEARedRibbon Week in your school community? Find suggestions for #RedRibbonWeek events & activities from @DEAHQ: https://go.usa.gov/xeqQh

Rutgers University is telling all of its employees that they must be fully vaccinated against COVID-19 by Dec. 8 or risk being terminated, writes Patch's Carly Baldwin:
https://patch.com/new-jersey/woodbridge/s/hvygj/rutgers-issues-vaccine-mandate-for-all-25600-employees?fbclid=IwAR1bGrtzDnriOjjXwJBqrUC5KY9jJcsDwQKrSEOL4FzX-wOBdPIoV8D_1Ik