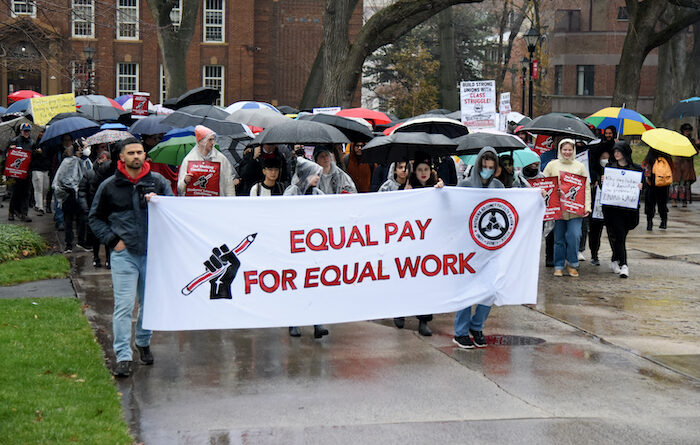 Undeterred by the steady rain, Rutgers University faculty, staff and students gathered Dec. 6 in New Brunswick for an outdoor rally to support Rutgers unions in their quests for fair contracts.

The Hub City rally, one of three held around the same time at the other main Rutgers campuses, began at Voorhees Mall. Among the speakers there was Rutgers AAUP-AFT member Todd Vachon, director of Rutgers LEARN and an AFTNJ higher education vice president.

“Today we draw a line in the sand,” Vachon said. “We say we know where the money is, and we’re coming for it. … When we come together in solidarity … there’s nothing we can’t achieve. The power is ours.”

Eric Richard, legislative affairs director for the New Jersey State AFL-CIO, noted that as an AFT member for many years, “I know firsthand the struggle of workers, staff [and] faculty here at Rutgers.”

“It’s not easy being union at Rutgers,” Richard added. “But when we work together, we win together, and the AFL-CIO [will stand] with you every step of the way until we have a fair contract.”

In an emphatic display of support for Rutgers AAUP-AFT members, AAUP President Irene Mulvey held a pencil above her head, replicating the local’s logo.

Participants marched along College Avenue to Winants Hall, site of the Rutgers board meeting. On a stretch of grass near where more union leaders were to speak, Rutgers AAUP-AFT’s Patrick Nowlan had set up a generator to inflate a large Grinch from Dr. Seuss’ “How the Grinch Stole Christmas!” AFT President Randi Weingarten led a chant of “Fair contract now!” before speaking for around six minutes.

“We know there have been lots of issues and struggles in colleges and universities through COVID,” Weingarten said. “And the same issues in New Jersey were there everywhere else, but you found a way to lift students up, and this university didn’t suffer because of you.

“In this rally, you see [in attendance] the head of the AAUP, the head of the AFT and the head of AFT New Jersey … all standing here saying, ‘The frustration is real.’ And what this administration needs to do is to put bargaining dates at the table, to bargain in good faith and to show its faculty some fairness and some decency and respect for everything this faculty has done.”

After the rally, AFTNJ President Donna M. Chiera seconded Weingarten’s assessment of the frustration, adding that little has changed in union members’ dealings with Rutgers management over the past two years.

“President Holloway began his tenure stating he wanted to turn the page and work with labor to move the university forward in a collaborative partnership,” Chiera said. “Unfortunately, the administration has continued to disrespect professional staff and faculty and not negotiate in good faith. The same anti-labor minions who surrounded previous Rutgers presidents McCormick and Barchi are still controlling the conversation on the highest level. It is time to demonstrate real leadership by embracing the professional voices of those in classrooms, laboratories and offices.”