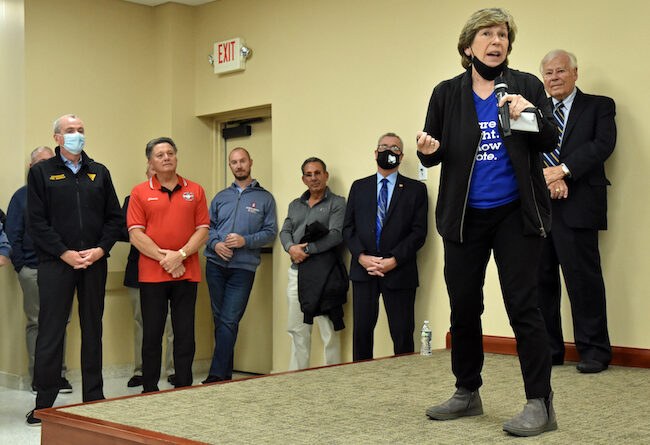 “Everybody’s gone through a lot of you-know-what during COVID,” Weingarten said. “There’s anxiety all over the place. … But what you’ve had in New Jersey [is] leadership that has our back: leadership that says safety is important, jobs are important, making sure we get back to normal is important, but lifting people up. … And that’s what you have with Phil Murphy.”

Election Day ended with the gubernatorial race too close to call, but by 7 p.m. Nov. 3, The Associated Press, The New York Times and The Wall Street Journal had all projected Murphy as the winner. More than three hours later, he gave his victory speech from Asbury Park.

“I am humbled to be the first Democratic governor reelected in the great state of New Jersey since my dear friend, the late Gov. Brendan Byrne, did this in 1977,” Murphy said. He proceeded to run through a checklist of first-term accomplishments, such as having the top-ranked public school system in America and making college education more affordable, and gave a shoutout to “our brothers and sisters in organized labor who stood tall in support of us and our mission.”

“On behalf of AFTNJ, I wish to congratulate Gov. Phil Murphy for winning a second term,” Chiera said via Facebook following Murphy’s speech. “Under his leadership, education and labor have made important strides over the past four years. We’re proud to be the No. 1 PreK-12 system in the country, and we look forward to working with the legislature to move New Jersey’s higher education institutions to the top.”