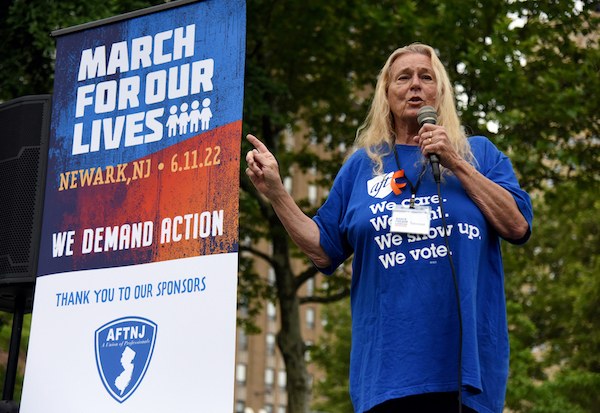 Hundreds showed up June 11 in Military Park to participate in March for Our Lives Newark, one of many rallies that day in New Jersey against gun violence held in solidarity with the national march in Washington, D.C.

Before and after the half-mile march that traveled in part along Broad Street, several featured speakers graced the stage, referencing recent mass shootings in America, citing personal experiences and calling for gun legislation.

“This is an issue that not only involves our students in schools,” said AFTNJ President Donna M. Chiera. “I love the idea of [politicians] talking about keeping schools safe and secure. But eventually, people leave school buildings. They go to churches, they go to grocery stores, they go to outdoor concerts, they go to libraries … We don’t have to just talk about mass shootings. Shootings happen every day in every single community.”

Here are excerpts from others who spoke at March for Our Lives Newark:

• “New Jersey has been at the forefront of doing many powerful gun-safety laws. But if this country doesn’t join forces with the Garden State, we will still have the impact of loose states filtering guns into our neighborhoods. … People are so interested in so many other things. They want to tell me what to do with my uterus. They want to be sure I have a Social Security number to get access to health care and resources. They want to be sure that I love whoever they think they deem is appropriate according to their standards. But when people die before them, they are willing to turn a blind eye and not have accountability. Enough is enough.” — N.J. Senate Majority Leader M. Teresa Ruiz

• “For the past two weeks, we’ve talked about horrific shootings across this country. … But gun violence happens every day in communities across this country, in communities such as this, my home. For example, there was a mass shooting March 16th in Irvington, New Jersey. Did that get the attention that other communities receive? We live with this every day … We have to include all gun violence in this fight. We’ve become so accustomed to mass shootings that only the ones with high death counts make the national news. But these incidents of gun violence resonate in every community.” — U.S. Rep. Donald Payne Jr.

• “People are losing their lives in this epidemic, and as a public health physician, we understand the science that leads to this senseless brutality. We understand that the lack of gun accountability, the lack of rationale and commonsense laws, is snuffing out futures, is snuffing out hope, is snuffing out dreams, but we have to have the will and the determination to stop it. People die when good people of conscience are silent, people die when people don’t hold power accountable, people die when people refuse to stand up and take a position. Don’t let that be us — don’t let that be us in 2022.” — Dr. Chris Pernell

• “At University [Hospital], we serve approximately 650 gunshot-wound victims a year. Let that sink in. … When a bullet enters a human body, it more than pierces the tissue. It does more than shatter the bones; it does more than dislocate the limbs. It severs the survivors’ heart. It ends hopes; it ends dreams that you may have had for your future or your children’s future. I say that because I’m speaking my existence. … I am a survivor. I lost my son through gun violence in October 2015. Imagine having to come to work after that. It’s not an easy pill to swallow.” — Banita Herndon, HPAE Local 5089 president and nurse at Newark’s University Hospital