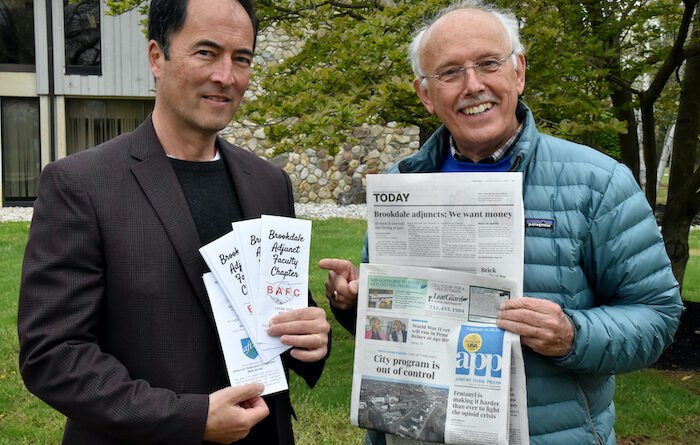 The Brookdale Adjunct Faculty Chapter of AFT Local 2222 gathered April 26 near Brookdale Community College’s Bankier Library to engage with students and ask them to support the school’s adjunct professors in their quest for a first contract.

BAFC Acting President Joan Carroll and Negotiations Chair Jim Schmitt were joined by AFTNJ President Donna M. Chiera and others in distributing more than 150 brochures, which featured facts about pay and workload for Brookdale full-time faculty and adjuncts, as well as a QR code to a petition calling on Brookdale’s administration to negotiate with the adjunct chapter in good faith.  (The April 26 event coincided with an Asbury Park Press story by writer Susanne Cervenka featuring an interview with Schmitt, who talked about BAFC’s contract struggles as well as the timing of pay for adjunct professors.)

BAFC members will be distributing another round of brochures at Brookdale’s Adjunct Job Fair, set for April 27 from 5-7 p.m. at the Student Life Center.

“School districts, particularly if they’re in those [nine] counties, have every right to say, ‘Listen, we need the kids and educators to put masks back on when they’re indoors.’ But as a statewide matter, no news to make today.” — @GovMurphy https://www.nj.com/coronavirus/2022/05/nj-looking-at-how-to-respond-to-new-covid-surge-murphy-says.html

Every Thursday this month, @AFTHigherEd is hosting a student debt clinic to help our members navigate their student debt. If you have questions about repayment plans, #PSLF, or @SaveWithSummer, get registered to learn more.

Our hearts break hearing the news of the shooting violence in #Buffalo NY. Find resources to teach about race and addressing racism for prek-12: https://sharemylesson.com/collections/teaching-about-race-and-racism-lesson-plans-and-resources @AFTunion @rweingarten @kellycbooz