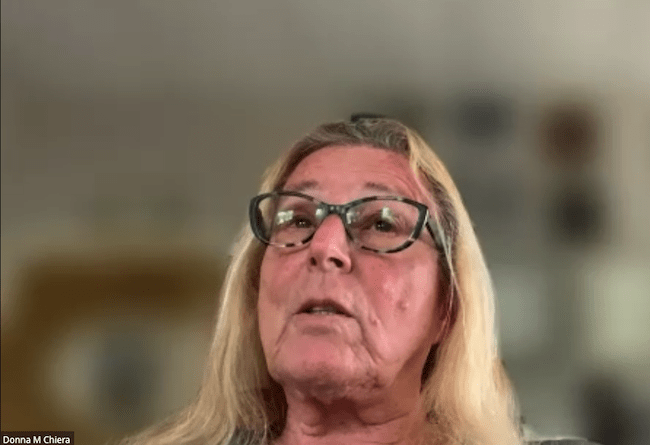 AFTNJ President Donna M. Chiera has asked that $100 million in American Rescue Plan funds be allocated “to shore up New Jersey’s higher education system.” She made her detailed request Aug. 2 during an ARP virtual hearing with Gov. Phil Murphy’s office.

Chiera, the hearing’s fifth speaker, opened by saying many of New Jersey’s public and private institutions of higher ed “are going through financial hardships and are thinking to cut staff, programs and services to students just to keep their doors open.”

She broke down the $100 million request as follows:

• $25 million each for William Paterson University and New Jersey City University. WPU is “going into a third year of layoffs,” Chiera said, while NJCU “is now on a 90-day budget.”

• $15 million for Rider University. Chiera noted that money was previously budgeted by the state for Bloomfield College, also a private institution.

• $5 million for Thomas Edison State University, which Chiera said is considering the sale of a valuable painting in order to stabilize its budget.

• The remaining $30 million would be set aside “to help community colleges and four-year institutions shore up their [budgets],” Chiera said. “However, I’m not asking that money is just handed over to these institutions. I believe each institution has to submit a strategic plan with clear goals and measurable benchmarks. I think someone from either the governor’s office or the department of higher ed needs to monitor those budgets to make sure the money is being spent where it should be spent.”

In closing, Chiera said, “To me, education is the goal and the foundation for anything we do in the state of New Jersey. … If we could invest out of federal funds 100 million dollars to renovate a basketball arena at Rutgers and to build an indoor football [practice] facility, we could certainly invest 100 million dollars in the true mission of higher education in New Jersey, and that is educating our students.”